Home / About us / Board of Directors / Mr. Rajeev Thakkar 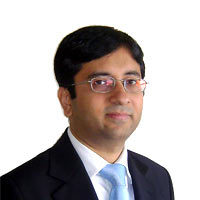 Rajeev Thakkar possesses over 15 years of experience in various segments of the Capital Markets such as investment banking, corporate finance, securities broking and managing clients' investments in equities.

His tenure at PPFAS began in 2001. His passion for researching and analysing the fundamentals of companies was evident. from the very beginning and very soon he was heading the Research division at PPFAS. His responsibilities soon expanded as he was appointed the Fund Manager for the flagship scheme of the Portfolio Management Service, titled "Cognito" in 2003.

Rajeev is a strong believer in the school of "value-investing" and is heavily influenced by Warren Buffet and Charlie Munger's approach. His keen eye for ferreting out undervalued companies by employing a diligent and disciplined approach has been instrumental in the scheme's stellar performance ever since he assumed the mantle.

Apart from his technical ability, what distinguishes him from many others is his ability to stand his ground and remain unflappable during difficult times. This trait enables him to resist the temptation of entering speculative stocks during extremely bullish times as he believes that it is not appropriate to wager on clients' funds and faith by chasing companies that one does not have any conviction in. He strongly believes that only stocks purchased at right valuations will provide long-term returns and is unperturbed by short-term underperformance. Besides that he also has had the courage and wisdom to reject fund infusions in the scheme if he felt that the investment opportunities were absent. Under Rajeev's able stewardship, "Cognito" has performed excellently, as many satisfied clients will readily testify.

A very impressive aspect about Rajeev is that even before he was appointed the CEO (in 2007), he was always observant about various aspects of the business and did not restrict himself only to his functional area. Although he was officially assigned to manage the PMS and handle the equity research team on the broking side of operations, he has played a pivotal role in a number of PPFAS' new initiatives such as the introduction of web-based broking, the emergence as a depository participant, the various modalities involved during the merger of two related companies in 2007, etc. He is a man of few words but his low-key demeanour often underplays the fact that he is a good listener, a team player and a razor-sharp thinker.

Rajeev's academic inclination is evident in the plethora of degrees earned by him. He is a Chartered Accountant, Cost Accountant, CFA Charterholder and a CFP Certificant.

He likes reading, playing chess and listening to music in his spare time.